Posted by leon in Uncategorized on January 25, 2009

Today, my chrysalis hatched, and I went from being just some geek to being a true Ã¼bernerd. That’s right–today, I passed the test to be an Amateur Radio Technician! This gives me the authority to transmit radio waves on certain parts of the spectrum, at least once the government adds me to its database. I’ll even have my own call sign! (US call signs start with the letters A, K, N, or W, which was something I had to memorize for the test. I found the following mnemonic handy: “WANK”.)

In general, this has no use, except that it lets me communicate with people when I’m somewhere that’s not good for cell phones. Hang gliding is one of those cases, so this summer I’ll be able to legally communicate with fellow pilots and chase drivers. Hooray!

A drawing of Louis

Posted by leon in Uncategorized on January 22, 2009

An artistic woman saw my post about putting Louis to sleep, and she wanted to sketch my picture of him that was taken an hour before he died. Her sketch is really good, and it captures Louis’s habit of laying his head on my arm far better than the photograph does. 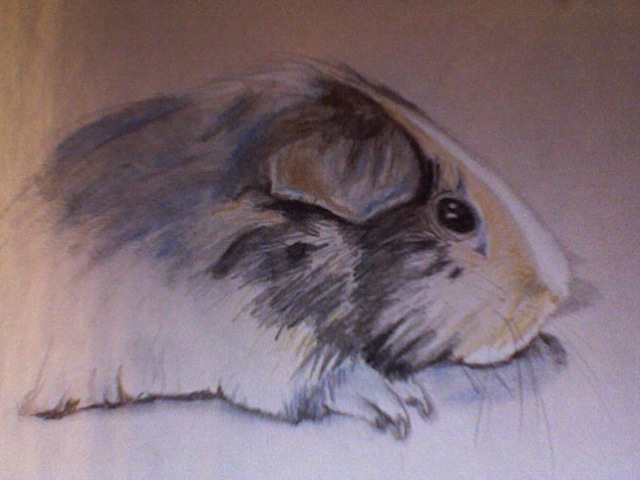 Posted by leon in Uncategorized on January 20, 2009

This morning, I attended the inauguration viewing on Berkeley campus. It was amazing, with a tremendous crowd that cheered for Obama, laughed at Bush, and booed and hissed at gay-hater Rick Warren. I’m sure there’ll be pictures on the news (or at least some dude’s blog) somewhere–there were plenty of cameras out, so I didn’t bother to take any pictures.

The one thing that really changed the mood of the ceremony, though, was the presence of subtitles. Oh, the subtitles were welcome enough, but evidently the C-SPAN employee in charge of subtitles was an idiot, and he comically flubbed several lines.

Posted by leon in Uncategorized on January 19, 2009

Screw dreaming of genies; I dream of guinea pigs. I won’t bore you with the whole thing, but suffice it to say that all three guinea pigs were present, and it didn’t occur to me once that two of them are dead now. I’m not sure what it means, but I can still imagine Louis with a fair amount of clarity. I know it’ll fade in a few months or years, but for now I rather like that clarity of memory, which is unusual for me.

Also, in the dream, Chester jumped around and climbed from one part of the cage to another, and I was impressed by the quality of my internal representation: it’s exactly the way he does jump, walk, and lie down in real life. The human brain is a magnificent pattern-learning machine.

Posted by leon in Uncategorized on January 14, 2009

I forgot to put meat (which I bought specifically for stir fry) in my stir fry. That’s indicative of something; I just don’t know what.

Posted by leon in Uncategorized on January 13, 2009

Consider the following shampoo for sale on Amazon:

END_OF_DOCUMENT_TOKEN_TO_BE_REPLACED

Posted by leon in Uncategorized on January 13, 2009

I’m back in Berkeley after nearly 4 weeks in Tennessee. It was a pleasantly long break, and I did only the bare minimum of work. I cooked a lot with my brother Sam, even making fudge with my mom’s guidance. That was useful for my parents, in part because….

Now, I should probably tell you that my mom has multiple myeloma, a sort of marrow cancer. I’ve been avoiding telling people because I don’t want them to see me as needing their support. I mean, what can people do? But it turns out they can do a lot, in particular taking care of my guinea pig Chester while I was gone. Thanks, Chung Hay, Todd, Cheryl, and Ryan!

So, my cooking was useful because my mom, with her low blood counts, wasn’t allowed to use a knife, and that means my dad has been doing most of the cooking, so our help with that was probably useful.

In any case, my mom is at Vanderbilt having another round of chemotherapy right at this moment. She says the side effects aren’t as bad as she’d been warned, and the main result is a lot of tiredness. The worst part is the low immune system and clotting afterward–she was in the hospital for 1-2 weeks after her last chemo because she had a mysterious fever. And it made her miss her brother’s wedding, but at least she got to take part via Skype. It was kind of amazing that she could be there with us in a way. (The wedding was wonderful, by the way.)

Now that I’m back in Berkeley, I’m aiming to graduate by the end of the summer. I think I can do it, but it will require substantially more effort than I’ve been putting in so far. For the forseeable future, I’m officially declaring Sunday a weekday. Onward and upward!