Do I get stupid when I’m hungry?

I was sitting here working, and I thought, “Gosh, I’m hungry. But it’s not even 11am. I didn’t eat breakfast any earlier than usual. What gives?” It took me quite a while to  realize that I usually have a snack in the middle of the morning–right around now. I’m a fool!

“It’s like a big group hug that crushes you.” – Josef, visiting ICSI from Pittsburgh, talking about our office.

“I’m preemptively disappointing you.” – mother to her daughter in an improv skit

“Remi suspected Joseph was exaggerating. But that didn’t matter. Even if it was all a load of bull semen, it was great bull semen.” – from David Brin’s Earth

I am ready to kill myself and eat my dog, if medicine prices here ([url redacted]) are bad.

My dog and I are still alive 🙂

I’m not sure why, but that strikes me as terribly funny.

All right. So in the show last night, the guy told a story about how once on Password, the word to guess was “money,” so the clue-giver said “dough,” and the black woman responded “knob.” And everyone had a good laugh. Then the performer joked about the white guy in the audience looking around wondering what the joke was. Well, that was me. I don’t get this joke. Does anyone care to explain it? Some discussion here and here suggests that “dough” sounded like “door” in her dialect, so that’s why she responded that way.

BTW, the story might have the details wrong. Some say it was on the Newlywed Game, some on Pyramid (with Alan Alda), etc. Some discussion here.

Last night I went to see one of the San Francisco Improv Festival shows. I’d meant to go on Thursday, but I actually forgot. I was running late, and I got to the Buriel Clay Theater just a minute or two before 8pm. So, I asked for a student ticket, and got in just in time.
END_OF_DOCUMENT_TOKEN_TO_BE_REPLACED

This morning, like last Sunday, I was awoken by wheeking. Chester was worried because I hadn’t given the pigs their treats yet, so he called out wondering where they were. This is a new development–prior to this summer, the times I got up in the morning could vary by an hour or more. This summer, though, I’ve been very regular about giving the pigs their treats–after I get out of the shower, usually a bit before 9am.

On the one hand, this is very cute. On the other hand, it means that it’s damn hard to sleep in on Saturday morning.

What’s in my belly? I know it sounds silly, but my belly is mysteriously large. It’s been that way for years. I don’t think it’s just fat. You can pinch a little fat on my belly, but not a whole lot. I’m clearly a few pounds overweight, but it’s really not much. Here’s a topless picture of me from May to prove it (just what you’ve been hoping for, I’m sure). I seem to be either wiping the water from my face or praying. 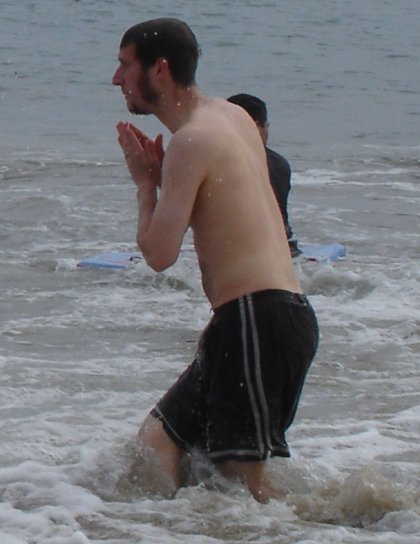 So. There I don’t look too bad. You can see there’s a little fat on my belly, but no potbelly. But if I relax my belly, it sags out quite a bit, into a full-fledged potbelly–except I don’t know what’s in there! My mom asserted that I just have untoned abs. If I got more exercise, then my belly wouldn’t sag that way. When I asked the doctor, she said more or less, “yeah, sure, that’s probably it.” So for now, that’s the official consensus.

Personally, I’m not blown away by that explanation. I don’t think most people have potbellies unless they tighten their stomachs. I think there’s some mysterious substance filling my abdomen.

Both guinea pigs just bathed themselves at the same time. I don’t think I’ve ever seen them synchronize like that before, so I chalk it up to coincidence.

This has to be the most trivial post I’ve ever made.

Louis was just scratching himself, and he was off-balance, so he fell over. That’s not so uncommon, though it is cute. The kicker was that then he just lay there, like that’s what he’d meant to do all along. Maybe that was because he knew I was laughing at him, though.

The Great Milk Tragedy of 2007

Today will go down in history as the Great Milk Tragedy of 2007. As I carried my groceries and new hiking supplies in the door, I bobbled the gallon of milk and dropped it. It ruptured on one side, spewing milk across the floor. I scooped it up and put it in the sink pretty fast, saving more than half of it. But the cleanup was an annoyance–even after I cleaned up the big spill, I managed to spill twice more while trying to get the remaining milk from the damaged carton into a pitcher. And now I need to go do laundry before the many milk-soaked cloths turn rancid.

Hopefully I learned something from this, so there will be no Great Milk Tragedy of 2008.