Do you remember how you were taught to write in grade school? I was taught two main strategies: outlining and free writing. In free writing, you would write whatever came to your head, and then later you would rearrange and edit the stuff into something that’s readable. In outlining, you would first conceive of the entire structure, and then go and add the content.

I find that when I actually write, I do something in the middle. I start with some ideas of the structure, and I write some content, which may or may not relate directly. But then I just go back and forth, so that I improve the structure at the same time as I create the content. Now that I think of it that way, it seems obvious: it’s hard to structure a complicated set of thoughts without content, and it’s hard to see how to say those thoughts without structure, so of course I write that way. But is that how everyone does it?

So, my first poll ever:

This afternoon I was minding my own business, looking for information on what sort of information my written Qualifying Exam document should contain. I was trying to work, I swear! Accidentally, I stumbled upon this article from Slate.

The article highly critiques the MacArthur grant, which annually selects a few lucky young people to receive a large sum of money to help them do whatever it is they do. Slate objects that the chosen recipients are often from big cities, particularly New York and San Francisco, are usually not in the private sector, and fight for liberal causes. I agree that there seems to be some bias, but I don’t see why I should care.

First, conservatives think people should get to do whatever the hell they want with their money, so they shouldn’t object that some private foundation is giving money to certain people. And it’s silly to object to people who fight for minorities and poor people. What sort of right-wing goals are comparably noble? Helping the rich? Smiting the single mothers? Maintaining the racial status quo? And what private-sector causes are noble? If you’re working for a company, they’re employing you to make them money. Why should you receive a special reward for doing that?

And finally, of course the recipients tend to be smart people from big cities. The density of smart people is much higher in cities, so not only are there more people to choose from, but they’ll also be more noticeable, because there are more people around to notice them.

Anyway, I thought their claims of bias were possibly true, but had obvious causes that the Slate writers didn’t seem to think about.

Let me set the tone: Are people idiots??

Sometimes, I walk into or out of buildings in the course of my normal activities. This helps me to reach my destination. Often, this entry and egress requires going through doorways, especially double doors on public buildings. The thing about double doors is that there are two doors. Allow me to provide a diagram: 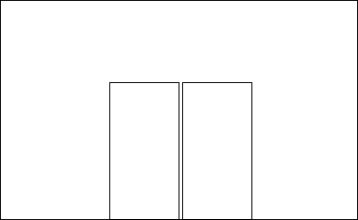 The funny thing about having two doors is that people going in could use one door, and people exiting could use the other door! Why is it that people always wait for the door that’s already open to be clear and then use that one? Is it so hard to open a door your goddamn self?! 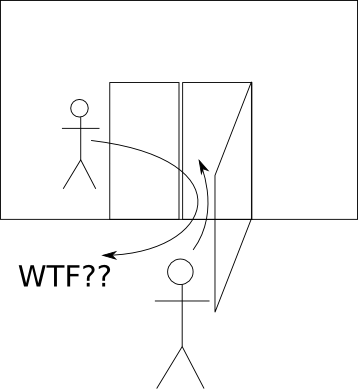 A few weeks ago, the stock market dropped precipitously; almost everything went down by several percent.  I said to Kate, now’s the time to buy!  So we did, and in the past week our new purchases have all gone up at least 3%.  They say that average investors shouldn’t try to time the market, because they don’t understand the forces as well, but I did it successfully.  Boo-yah!

I love salsa, and I am particular in my brands.  In Johnson City, we could easily get Old El Paso hot salsa, and it was delicious.  In St. Louis, we would occasionally go to Kate’s hometown of Quincy, where we could buy Country Sweet Cactus Salsa, which is absolutely incredible.  It’s so delicious, that I like to eat it plain, without chips.  Well, okay, I guess I like to eat lots of salsa plain, but you get the point: it’s arguably the best salsa ever.  But it’s not available here in California, since it’s bottled in Quincy Illinois.

So, I was going to order some of it, but there’s a catch.  From Red Cactus Salsa’s web page, their mission statement is basically to make tasty salsa for God. As an atheist raised in a Jewish home, I have a problem with that. Religion is the cause of many wars and a huge amount of (ongoing) suffering. Moreover, it is often used to fool people into doing stupid things. I don’t really think I want to support a company that’s going to use my money to lobby for school prayer, or fire its gay employees, or smite down the heathens, or whatever it is that God tells them to do. Certainly if I ran a business based on atheistic principles, they would have no qualms boycotting me.

What should I do? Is there a way to get tasty salsa without supporting religious nuts?

Posted by leon in Uncategorized on March 9, 2007

As you may have read, Milo died on Tuesday night.  We tried to feed him and nurse him back to health, and he started improving, but in the end he got worse and died.  In retrospect, we should have gotten him a dental X-ray much earlier; as a result of Milo’s death, we’ve switched to what I believe is a more knowledgeable vet.

In related news, I seem to be emotionally warped.  While I was sad enough to cry before Milo died, when it was clear that he was probably not going to make it, I didn’t cry after he died, not even when his little body was so limp and light in my hands.  At that point, it felt very matter-of-fact.  I’m not sure why, but I’m not pleased at my mild reaction.  This happened with the pigs I had as a kid; I cried when a weak baby pig died, but I didn’t cry later, when my other two girls died.  Kate has tried to reassure me that I’m appropriately emotional, but I remain unconvinced.

As you may be aware, my mother has multiple myeloma, a type of cancer that affects her bone marrow.  So far, I haven’t reacted appropriately.  I find it hard to believe that anything real would change in my life, so I don’t really act as though she might die.  I don’t even know how I’d react if she did.  Probably not like a normal person, though.

Posted by leon in Uncategorized on March 9, 2007

‘Did you know that a recent survey showed that 85% of women actually get aroused by a man who produces “above average” semen amounts? With our pills, she’ll be speechless… and defiantly coming back for more…’

I’d like to see the details of this study.  Was it a double-blind study?  What is their margin of error on that 85%?  How much additional arousal per milliliter of semen is predicted by linear regression?  And what makes the women so defiant?