Posted by leon in Uncategorized on January 29, 2007

My quest for a beard has not been going as well as I’d hoped.  Oh, sure, I have hair on my face.  But it’s blotchy on the cheeks, and very slow-growing.  For instance: 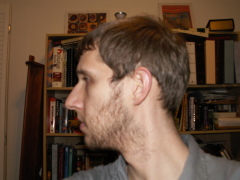 Today, I saw Steve, my office-mate, for the first time in a couple of weeks.  I’ve been out of the office a lot because of TA-ing this semester, and we just weren’t in the office at the same time.  He looked at me, and said that I had the same too-lazy-to-shave facial hair as he did.  He was amazed that I hadn’t shaved for 3 weeks; he already had a more pronounced beard after only 2 days!  Admittedly, his facial hair wasn’t as long, but it was darker and fuller, resulting in a better beard.

So, hopefully Kate will help me choose a sort of facial hair that will work for me.  Maybe I’ll even go ask a barber.  I’d rather not do something terribly weird, and I’d rather not mimic my brother (who has chin hair and bushy sideburns).  I’m not sure what will work.  Perhaps I’ll have to revert to my old mostly-clean-shaven
look.  At least I ventured out of my “comfort zone” for a little while.

Posted by leon in Uncategorized on January 10, 2007

In order to be a UC Berkeley teaching assistant, I need to sign the following loyalty oath.  It seems like some sort of horrible holdover from the McCarthy era.  WTF?