Posted by leon in Uncategorized on October 31, 2006

I just got rejected for my second and final fellowship application this fall. The first one was for Microsoft, and this one was for IBM. In both cases, UC Berkeley could only send a limited number to the company, and so my application never even left campus. Apparently UC Berkeley isn’t pleased with how I represent them. I’m disappointed, to say the least.

The financial prognosis isn’t terrible, but it’s at least not good. I can probably get support from a grant that ICSI has; at worst, I’ll have to spend some time TA-ing while furiously applying for other grants and fellowships. In any case, I can at least cover my tuition by TA-ing, but almost every course of action at this point results in me getting a pay cut, or possibly taking longer to graduate due to excessive TA-ing. I’ve had a relatively high-paying fellowship for the past few years, and when it runs out, I’ll get significantly less money. Kate and I will still get by, and I can pick up extra money by doing internships (and Numenta is still employing me part time), but all the same I’m not happy.

Posted by leon in Uncategorized on October 28, 2006

The exercise most likely to make you fart:

Posted by leon in Uncategorized on October 24, 2006

Kate’s not posting, and I want a distraction, so I guess I’ll have to post. I suppose a lot has been going on.

I’ve applied for fellowships, since my funding may run out. I was rejected for the Microsoft fellowship by Berkeley (since they could only send a few on to Microsoft, and apparently I suck), but I’m still in the running for the IBM one. That would be nice. The biggest immediate advantage of having done these applications is that I now have a fairly clear thesis description. I’ve even started writing code to do some basic exploration around the thesis idea. I’m working with a Spaniard named Alberto, who does races sailboats for fun. We’re combining a model for action (Petri nets) with a model for inference (Bayes nets). In the long run, the project will be much more complicated (and will presumably be done without Alberto), but for now we’re starting simple.

Lately I have experienced many entertaining things. There was hang gliding, which was a lot of fun. (Unfortunately, I don’t think it’s practical as a hobby, since it requires storing and transporting a glider. Maybe if there was some sort of shared glider thing? Any Berkeley residents want to share a hang glider with me?) I got books signed by Terry Pratchett, and Kate and I saw Al Gore talk in Berkeley yesterday. (She has pictures up, but I’d also like to point out that we saw guards watching from the roof of the high school:

Needless to say, there have been interesting little things as well. I read “Surely you must be joking, Mr. Feynman.” He was one crazy physicist. He did everything, like taking a year on sabbatical to work as a biology grad student, and living for a while in Brazil, and so on. Plus, he had time to help invent the nuclear bomb, have a wife die of some sort of chronic ailment, win the Nobel Prize, solve the mystery of the Challenger disaster (chronicled in another book), and so on. I realize that he did most of this after he was my age, but I think it’s clear that I don’t measure up. I guess it’s not clear why I should expect to, but still it makes me feel a bit inadequate. Yes, I run my own webserver, but when he was in grad school he practiced watching himself fall asleep, until finally he had lucid dreams. Clearly one of these things is more interesting than the other.

Posted by leon in Uncategorized on October 6, 2006

The restaurant Ming’s has a website that shows some of their menu, in the form of images. However, they seem to have made the images by taking a screen shot of their text editor: the “misspelled” words are highlighted! That’s one of the funniest things I’ve seen all day. 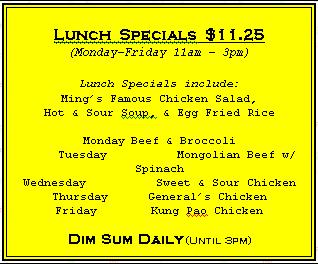