Though it’s really not that funny, this subject line amused me. It should really read “Self-diagnosis: Salmonella“.

I’ve been nauseous and sore for the past 24 hours, and there were a number of possible causes. I played softball on Monday, and I was surprisingly sore afterwards. Also, I upset my stomach with spicy food for the first time on Monday night. So, when I had a spicy lunch yesterday and then felt bad, I assumed I was just suffering from the same afflictions.

However, this morning I felt cold, even though the office thermometer is showing nearly 80 degrees. That was unusual, so I took my temperature; it turns out I have a 1-degree fever. (It’s been a while since I had a fever; I’m usually quite healthy.) So, I finally put it all together.

It sure sounds to me like I’ve got food poisoning. Perhaps I got it from fruit I didn’t wash thorougly? Maybe meat of some sort? I really have no idea, especially because Kate seems mostly unaffected.

I would whine about how this is such a bad time to get sick, with a paper deadline and a trip to St. Louis coming up, but I feel that we’re making good progress on the paper, and I should be feeling better by the time we travel. I sure hope so; traveling while sick really sucks.

Kate is convinced that she can leave for the airport two hours before our flight on Friday and still make it on time. I don’t think it’ll work out. At first glance, it seems like the airport won’t be that crowded, since this isn’t nearly as big a holiday as, say, Christmas. The difference is that Christmas travel is spread out over about a week. However, everyone who is traveling home for the 4th will be leaving on Friday evening.

So, here’s how I add up the time it’ll take her to get to the plane:

Clearly, we’re going to miss our flight. I’ll get there earlier and check in so that hopefully she won’t have to go through the ticketing line, but this has the potential to be very close indeed.

I go to school at U.C. Berkeley in the Computer Science department. My building is full of graduate students and professors, and everyone here has or will have at least a Masters degree. This is one of the top 4 computer science schools in the nation, and people here are really smart.

So, why are all three toilets in the bathroom nasty? They all have something floating in the bowl, and it’s not flowers or potpourri. Can the people around here not flush? I understand that sometimes the toilets misbehave and don’t flush very well when you pull the handle. So, you hold the handle down, or you jiggle it, or whatever it takes to get your shit out of there. These people can debug operating systems and all other sorts of crazy computer code. Why can’t they figure out how to flush the toilet? It’s not an NP-complete problem.

I decided I should write down this story before I forget.

When my parents visited, we hiked out on the peninsula forming the northern border of the San Francisco Bay. It was foggy, so we could barely see the Golden Gate Bridge, but we could look down and see the shore and water. In fact, we could see seals down there.

So, we walked up to the cliff and looked out over the water. And there, below us, I saw the rough, gray head of a whale poke out of the water! Amazed, I cried out “A whale!” and pointed. My parents looked, and were similarly amazed. Of course, it was only a few moments before we realized it was just a large rock that sometimes poked through the top of the waves. It did look convincing, though.

It was the most exciting rock of the whole weekend.

Computer science makes me daydreamy. I start working on a problem, and then I see how if I solved it, I could change the world. Maybe the solution to this problem will solve P vs NP (ha!). Maybe working on this problem will make me famous and revolutionize our understanding of the mind (again, unlikely). I can already picture the fame, respect, and fortune.

I always have high hopes, and I always end up disappointed. Still, I guess it’s not a bad thing to dream.

I never thought I’d have to deal with this

The person in the office next to mine just had a really loud conversation on the phone. She wasn’t really yelling, but she was definitely using her “outdoor voice.” And her phone was turned up so loud that I could faintly make out the sound of the person she was talking to. Who does that? Sheesh. I’m not easily annoyed, in general, but I was about ready to go over and tell her how loud she was.

One of the more interesting things about my parents’ visit was the wildlife. In theory, a bay is teeming with wildlife. However, in practice, I wouldn’t expect the San Francisco Bay Area to have much biodiversity. When I went out and about with my parents, we saw many fine creatures.

For instance, we saw a coyote. It looked like a medium-sized but thin dog. I don’t remember it that clearly, and I didn’t have time to take out the camera.

Also, we saw some seals. At first, we saw them from some cliffs, as you can see here (in a sequence of zooming-in shots): 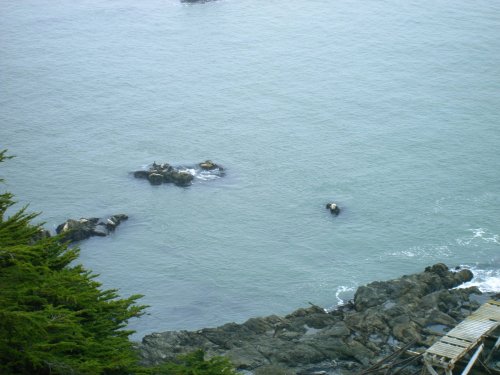 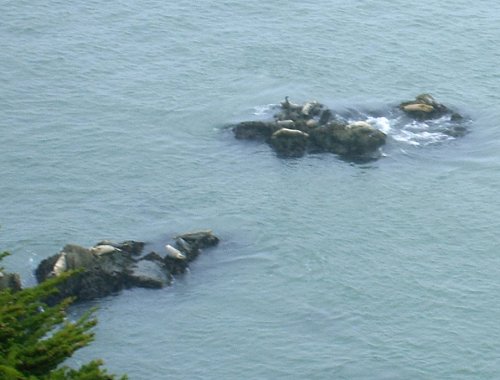 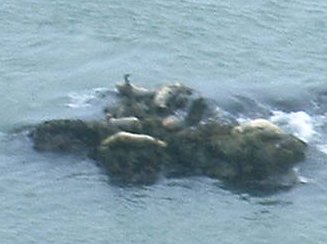 Later, we saw some seals from up close in our kayaks. They were only about 20 or 30 feet away–we were even close enough that we scared one of the more skittish ones into the water. (We didn’t mean to.) But, no one dared to risk a camera out on the water, so we have no documentation.

This weekend, my parents visited, and we did many fun things. In a pleasant surprise, Kate greatly enjoyed kayaking with us. We got to see seals from up close (20-40 feet, I’d say), and we saw many fine Bay Area homes. Unfortunately, the shoreline is quite urban, but there are still interesting things to see. Kate and I may even go kayaking again soon.

Then, my parents and I went to visit my great aunt Zelda in LA. It was a pleasant trip, though Zelda is probably my weirdest relative. Who wants to know anything about their 72-year-old great aunt’s sexual history?

While in LA, we stopped in a hot sauce store, where I bought a hot sauce. They only had two non-vinegar-based sauces, so I picked the least spicy. Unfortunately, it was still 10++ on their scale from 1-10. The brand is “Da Bomb”, and the sauce is rated at 120,000 Scoville Units. That’s at least 24 times as hot as Tabasco(tm) sauce. For reference, here is a chart: 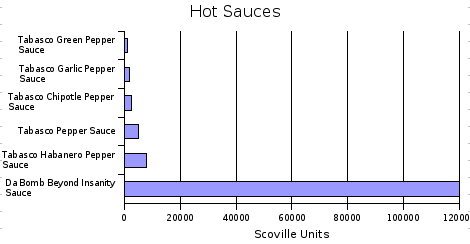 As you can see, my sauce is vastly hotter than any normal sauce. In fact, it is so hot that when I added half a teaspoon to a (small) bottle of salsa, the result was so hot it made my ears hurt. Nevertheless, I enjoy it greatly. I made a good purchase, one that will last for a good long time.

Posted by leon in Uncategorized on June 8, 2005

Yesterday, there were sirens outside my building. I know that the police department is at the end of the block, so it wasn’t that shocking, but I looked out the window when they continued for quite some time. At last, I saw the source: several police vehicles were escorting several runners going down the street, one of whom was carrying a torch.

I have no idea why a torch was going by; the internet did not provide many clues. There have been police torch-runs supporting the Special Olympics in the past, but I found no information about one going on now. I have no idea, and may never know, why someone ran a torch through Berkeley.

In the disturbing part of my news, today I saw a snail. It was busy doing snail things–not headed anywhere, just seemingly sniffing at something on the sidewalk. I know that snails are well-defended, so I decided to pick it up and see how far it retracted back into its shell. Well, apparently the shells aren’t as thick as I thought. As I tried to pick it up, I felt its shell crack under my fingers.

I felt a horrible sinking sensation, of the “What have I just done?” variety. I thought for a moment, and then just left it there and walked on; what could I do to help it? I’m sure I killed that snail, if not directly then by opening a route for infection. I feel bad. It’s just a snail, but it deserved better than that. I guess the moral is, “Look but don’t touch.”

Is there a word for that emotion, the sinking feeling that makes you feel sick with worry about something that you’ve done but cannot undo? It’s a very intense, immediate form of regret. There should be such a word. Nobody experiences that emotion very often, but it’s one that you don’t soon forget.

Posted by leon in Uncategorized on June 2, 2005

People sometimes annoy me. Sometimes I want to rant, but Kate isn’t there, or she’s heard it all before. It’s frustrating, but I finally realized I can vent by posting in my own journal.

People complain that the money in the Social Security Trust Fund is only getting 2% interest. I agree that it’s low, but the fact is that it’s the government that’s paying that interest, because the Trust Fund is entirely in the form of US Government Bonds. On the one hand, the Trust Fund gets poor interest, but on the other hand the government gets to borrow money cheaply. It balances out–it’s really all the same money. If our politicians wouldn’t keep borrowing money, this wouldn’t be such an issue. They could invest it in high-interest ways (say, in the school system), and it would be just as valuable.

Anyway, the answer to the Social Security “crisis” is to remove the cap on SS taxes. It turns out that only your first $x (something like $90,000) of income is actually taxed for Social Security. After that, your income is SS-tax free. If that little regressive tax was fixed, then there would be plenty of extra money to pay for the SS problem. The critical thing is that it has to happen soon, because that money adds up; if we only do that in 2040 or whenever, it won’t be enough to support SS for long.

The question is, how can anyone oppose such a move? People say that everyone should pay their fair share of taxes. Here, it’s clear that the richest few are not paying their share of SS taxes, while they’re receiving just as much benefit. Let’s fix that first.